Drowning in a deluge of data? What if there was a better way to grasp the information — literally?

Enter BigTop, an innovative virtual reality platform that allows you to interact with your data in a totally new way. Thousands of data points, three dimensions, unlimited possibilities.

And turns it into this: 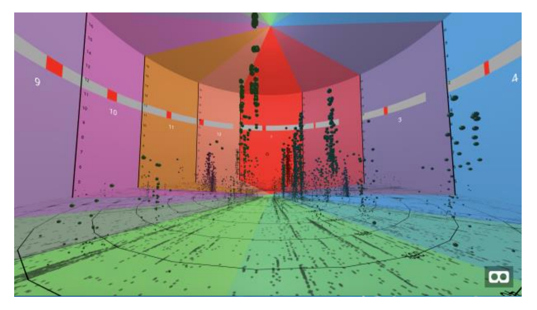 An avid gamer, Meyer had been searching for a way to take scientific data visualization into the virtual world, and Westreich was similarly interested in VR, 3D programming, and building better tools for the scientific community.

Scientists have been comfortably plodding along with scatter plots for decades. But the medium is limited to two dimensions, and is insufficient to handle the vast amounts and the depth of data being generated in the era of genomics and precision medicine.

The Manhattan plots often used to visualize genome-wide association study (GWAS) data can allow you to map out associations between disease risk and chromosome locations, for instance. But what if you want to throw in another variable, such as age, race or mutation frequency?

“Scatter plots provide a good way to get an overall glimpse, but you can’t really drill down into the data,” Westreich said.

BigTop widens the field of possibilities — by literally widening the field.

“Computer screens are relatively small. Large amounts of data won’t always fit,” Meyer said. “One of the luxuries of virtual reality is the space to set up an entire world. A lot more data can be presented that way.”

BigTop takes three different qualities of each data point, plotting them in three different dimensions. If you find a point of interest, you don’t have to remember the coordinates and type them into a browser to investigate further — you can just turn around and select the point. That action brings up even more information culled from the originating dataset or other records.

The program not only enhances the data analysis process for professional users, but it makes it more accessible for a wider audience, who may find the physical interaction to be more intuitive and easier to understand.

“It presents data in a way that we are better equipped to deal with,” Westreich said. “The dataset is not just a file that sits somewhere. It’s turned into a bright, vibrant, multicolored thing that people are curious to explore. You can literally walk through the data. You no longer have to try to conceptualize it in your head.”

BigTop was born one Friday afternoon in March 2018 during a session of Science Frontiers,  time allocated to DNAnexus science and engineering teams to get creative on projects not directly related to their day-to-day customer work. Every week, about a dozen people participate.

Nattestad and Meyer came up with the concept and Westreich was soon brought in to “begin sticking toothpicks into paper plates” to develop a prototype. Soon, Meyer was lugging his huge gaming computer and Oculus headset into work each Friday as they delved into the brave new world. They experimented with different platforms — one of which was abruptly taken off the market — and settled on A-Frame.

“It’s a relatively new environment, so there’s not years worth of documentation and user questions and answers,” Westreich said. “It’s been challenging, but it’s also exciting. We are really getting in on the ground floor and contributing to the evolution of this completely new media.”

BigTop works with a variety of VR headsets. With the headset on, you can walk around to explore the data, using your right-hand controller to project a laser that can be used to select points: simply aim the laser at a point and pull the trigger on the controller to get info on it. Your left controller will present a virtual hand; this currently does nothing, but you can use it to wave or give a thumbs-up to your data, as the team notes in their QuickStart guide.

The program can also be played like a video game using a phone, computer screen, keyboard and mouse, making it accessible to those who may not have more advanced equipment.

After demonstrating the program to colleagues at DNAnexus, the company invested in VR equipment, and Nattestad and Westreich have taken it on the road to several conferences, where BigTop has been a big hit.

“It’s a lot of fun and attracts a lot of attention. And it shows how we, as a company, are experimenting with new modalities and thinking out of the box,” Westreich said.

BigTop is currently available for free on Github, where it comes pre-loaded with a GWAS dataset from the GIANT consortium with associations between SNPs and height, and a second dataset on breast cancer. The program can also be used to visualize other datasets — Westreich presented an interactive rice genome at this year’s Plant and Animal Genome Conference, for instance.

After experiencing BigTop at the last DNAnexus Connect user group meeting, customers have been eager to get the program integrated into their DNAnexus packages. Westreich and Meyer said the program is already optimized for use as a DNAnexus file viewer. Users have to put their data in the right format themselves, which may not be a straightforward process depending on the data.

But Meyer thinks the payoff will be worth it.

“Virtual reality is still very new. This sort of biological data exploration has not been available before, and scientists are not nearly as cutting edge as you might think when it comes to data visualization,” Meyer said. “Although they may be slow to adopt new methods, when they do start and realize the potential, they embrace it.” 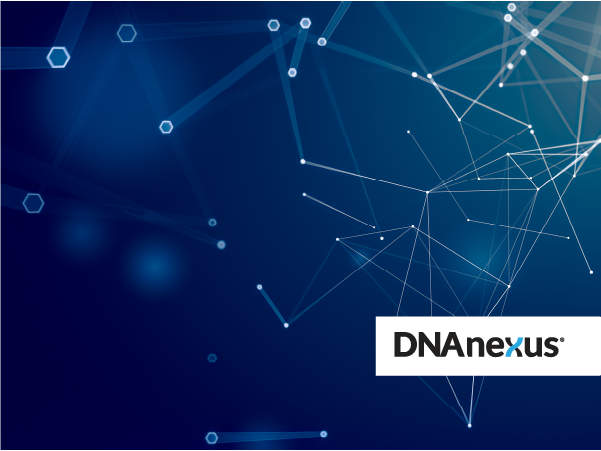 May 21, 2019
In " General Information "
Previous
Helping Scientists Discover the Hidden Jewels Within UK Biobank Data
Next
Teaming Up To Improve Outcomes for Multiple Sclerosis Patients