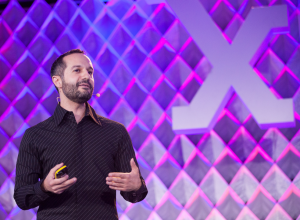 Last week, our Director of Science & Clinical Solutions, George Asimenos, Ph.D., gave a talk at Stanford’s Medicine X conference, titled, “Open-source genomic analyses on open-source patients”.  It was a timely talk given the recent release of the NIH’s proposed Genomic Data Sharing Policies, which, in essence, say that scientists who use government money to conduct genomic research will be required to share the data they gather in a timely manner.  This is an important step towards a more open approach, which is essential to the greater good, despite the challenges that come with it. Based on the Twitter response, his talk obviously struck a chord.

The talk started off with the view of planet earth from space, and quickly zoomed in to a park next to Lake Michigan, to a couple having a picnic in the park, to the individual’s hand and ultimately to the DNA within the individual’s cells.  The realization being, our molecular make up plays an important role in our health and wellbeing.  It’s also highly valuable information to the biomedical research community.

Patient data has always been a highly informative and useful resource, but has grown in value as additional types of data, like genome sequences are layered on top of it.   Currently, if you end up getting your genome sequenced within the healthcare system, only a select few have access to your genome, this practice limits the opportunity for diagnosing or otherwise analyzing your genome.

Recently, efforts such as the Personal Genome Project have demonstrated the value of individuals making available their genome, health, and trait data to the public in the name of science. The emergence of these “open-source patient” models, where individuals are motivated to publicly disclose personal information about themselves, such as their name and age, their genomic information, as well as information on their conditions, have the potential to give us the much-needed examples of how they can influence the development of new medical treatments for their diseases.

In George’s talk, he looked at one such cancer patient, who uploaded both his DNA sequence as well as his colorectal cancer tumor sequence.  Using the DNAnexus platform, we analyzed the two samples using available open-source tools: BWA, SomaticSniper, and Variant Effect Predictor.  Analyzing the patient’s genome revealed that there is a tumor-specific premature stop codon in the adenomatous polyposis coli (APC) gene. As it turns out, a large proportion of all sporadic colorectal cancer cases occur as a result of premature nonsense mutations (creating a stop codon) in an individual’s APC gene.

Reviewing the literature on NIH’s clinical trials website, we discovered that “members of the aminoglycoside family of antibiotics have been found to induce ribosomal read-through of nonsense mutations, leading to expression of a full length, functional protein. Investigators have recently shown that members of the aminoglycoside and macrolide antibiotic families can induce read-through of the nonsense mutations in the APC gene and lead to reduced oncogenic phenotypes in CRC cells and in different mice models.”  In other words, what if something as common as erythromycin could treat this particular cancer?

Only at the end, while researching if erythromycin would be a good match for this patient, did we discover his identity, Jay Lake, who crowd funded the sequencing of his genome and tumor, passed away recently. But it was his wish that people would still use his information in the hopes that future cancer treatments might be found to help other patients.

What this conceptual experiment shows is, that with a more open approach new treatments or new uses for old treatments might be available to help patients. George’s talk asked an important question, should we be incentivizing and enabling the sharing of genomic data in ways that support this kind of open model in the practice of medicine?

It’s an important question with many policy and ethical follow-on questions that must be addressed; there are also technical hurdles to overcome, as well as consumer education requirements to tackle. The more of us that add to the population of genomics data available for research and interpretation, the easier it will be for us to find the meaningful, and actionable, needles in the haystack.

It’s an exciting time in the practice of medicine. Powerful cloud technologies are intersecting with robust DNA sequencing technologies and data analysis tools that can streamline the sharing and interpretation of data. There is a shifting mindset from sick care to well care. We have innovative new sensors, and apps in our pockets, on our wrists and on our bodies that are allowing us to take a more active roll in managing our wellbeing. Now the challenge becomes, how can we harness large genomic and phenotypic data flows to improve patient care?

September 11, 2014
In " General Information "
Previous
On A Day When Apple Sidesteps Healthcare Technology, Mary-Claire King Shows How To Confront It
Next
Harvesting Insights from the 2014 Plant Genomics Congress