Recovering from AGBT: Exhausted but Encouraged !

It’s hard to believe the whirlwind of the annual Advances in Genome Biology & Technology meeting is already over! The DNAnexus team had a terrific time at the conference, and we want to thank everyone who stopped by our suite and attended our Friday afternoon talk. 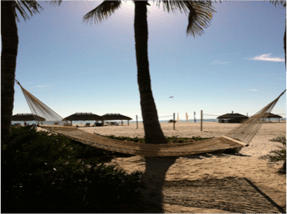 This year’s meeting had more attendees (not to mention the thickest abstract book) than ever before. In many of the talks and posters, the challenge of data interpretation was front and center. Several scientists mentioned that the data sets they’re comparing and the analyses they’re performing pull together far more data than they’ve ever had to deal with. Indeed, the very first speaker of the meeting, Eric Boerwinkle from the University of Texas, told attendees that the community needs to keep pushing for better informatics and data interpretation tools. It was gratifying to see that so many scientists are making use of large, publicly available databases — ENCODE in particular was cited in several presentations.

The talks we found most interesting were about applications of next-gen sequencing technologies, ranging from clinical sequencing to epigenetics to microbiome studies. Christine Eng from Baylor College of Medicine spoke about whole exome sequencing in the clinic, noting that her team’s pilot project saw a 25% success rate (conservatively estimated) in using this information to diagnose a disease. She also said that clinical genomics will have trouble ramping up without more genetic counselors and geneticists; at the moment, there are just 3.5 such experts per million people in the US. In another talk, Leonid Moroz from the University of Florida captured attendees’ imaginations with a discussion on the biological mechanisms underlying memory persistence. He focused on epigenetic changes in the brain, finding that demethylation of just one strand of DNA seems to precede the formation of long-term memories in model organisms. Finally, the most-discussed talk of the conference came from Kjersti Aagaard at Baylor College of Medicine, who spoke about metagenomics in medicine. She presented data indicating that the placenta is not a sterile environment as previously thought, and that the placental microbiome is most closely related to the oral microbiome. For this technology audience, it was a real treat to see just how much compelling science is happening because of the sequencing tools that have been presented in previous years at AGBT.

It’s clear to us that the focus is rapidly moving from sequencing technologies and toward data interpretation as the real immediate technological challenge in the genomics community. This year, there were a number of companies presenting analysis tools, including Maverix Biomics, Ingenuity Systems, Personalis, and more. In fact, there seemed to be many more of these types of tools on display instead of the usual plethora of next-generation sequencing technologies that people tend to expect from the Marco Island conference. It was a fairly quiet year for instruments — no major sequencing technology headlines came out of the meeting — so it was great to have lots of attention on data interpretation and the tools enabling it.

We hope that we were able to offer conference attendees an optimistic view of the data analysis situation. People who came to our suite had the opportunity to get a guided tour of the new DNAnexus, and we were pleased at how much interest there was in a customizable cloud-based solution for managing and analyzing sequence data. We hosted several demos and have been thrilled to see how many people from the meeting have signed up for beta accounts with the new platform to help tame their own data sets. 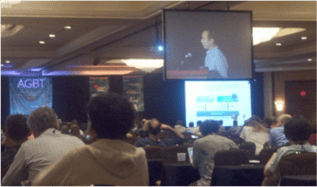 On Friday afternoon, our CEO and co-founder Andreas Sundquist gave a plenary presentation to introduce attendees to the new DNAnexus. Andreas’s talk provided a detailed look at the core attributes of the new DNAnexus — its configurability, extensible toolbox with more than 40 Apps, instant collaboration environment, and security and compliance support. He also noted that users could choose an intuitive drag-and-drop interface or opt for the more hard-core command line to suit their own needs. When asked about data upload speeds and cloud capacity, Andreas said that current ethernet speeds are usually sufficient to upload sequence data in real time as it’s generated, and pointed out that Amazon’s cloud capacity — on which the DNAnexus service runs — currently has the infrastructure to run 1 million whole genome sequences per year. 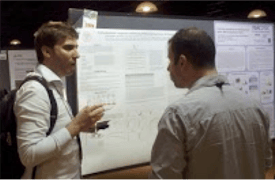 We were also delighted to meet Franck Rapaport, the lucky winner of a 4-Day AGBT conference registration. Franck, who hails from Memorial Sloan-Kettering Cancer Center in New York City, was part of a team with a really interesting poster comparing differential expression tools for RNA-seq type data analysis.

Though scientists are certainly facing new challenges in data analysis, we think this is a great time for informatics innovation. Services such as the new DNAnexus, combined with great new algorithms and Apps, are helping to pave a path forward for a new era of genomics analysis in which infrastructure, workflow, and interpretation options are as seamless and simple as they should be.

Looking Back at SFAF in Santa Fe