This weekend, I had the opportunity to present a short talk, entitled “Precision Medicine 2.0: Seeking Impact, Needing Champions” at the Stanford Medicine X conference. I thought I’d share a short digest of the talk; the slides are here.

(Disclosure/reminder – also highlighted during my presentation: I’m Chief Medical Officer of DNAnexus, a cloud genomics company intensively involved with precision medicine; while this talk reflects my views, and not necessarily the views of DNAnexus, my experiences at DNAnexus have obviously informed my perspective. My relationship with DNAnexus should be kept in mind by the reader.)

To understand where we are now, it’s useful to consider the excitement, promise, and extravagant expectations around the conceptualization and execution of the original human genome project, what you might call Genomics 1.0. Early proponents like Sydney Brenner stated in 1982 that with a complete DNA sequence and a big enough computer, “you could compute the organism,” while sequencing pioneer Wally Gilbert suggested in 1991 that with the complete genome in hand, “we’ll know what it is to be human” (see here for reference).

In a memorable response to this apotheosis of reductionism, Harvard geneticist Richard Lewontin penned a memorable essay in the New York Review of Books in 1992, suggesting proponents might be fetishizing DNA. His piece helpfully included this OED definition of fetish: “An inanimate object worshipped by savages on account of its supposed inherent magical powers, or as being animated by a spirit.”

Our tendency to imbue emerging technologies with almost mystical powers isn’t limited to DNA, of course, and might be applied equally well to “big data,” “design,” and “mobile.”

[Denny Ausiello and I offered our reaction to the completion of the sequencing phase of the first human genome announced by Celera in April 2000, in an essay for the New York Times “Week in Review” here.]

Following the completion of the human genome project, many in medicine felt a palpable sense of disappointment and disillusionment – where were the cures that genomics had promised? “We fought cancer…and cancer won” asserted a thoughtful 2008 Sharon Begley Newsweek article from this period. “Advances elusive in drive to cure cancer,” Gina Kolata of the New York Times detailed in 2009, as part of a memorable series, “The Forty Years War.”

Flash forward to the present, what might be called Genomics 2.0, defined by two important features: next generation sequencing (NGS), which has dramatically reduced the cost and increased the speed of sequencing, and cloud computing, which provides a way to manage the deluge of data that’s now emerging. Interestingly, in testimony before a Congressional committee last summer, genome pioneer (and Human Longevity Institute founder) Craig Venter said that the most important changes occurring in genomics technology involve computing, and added, “The cloud is the entire future of this field.”

The Precision Medicine Initiative, announced at the White House in January, captured much of the contemporary hopes and vision around the potential of the science, excitement not only around genomics but also around the ability to leverage digital health to provide greater visibility into patient-participants, and enable deeper connection with them.

The often breathless excitement around the promise of precision medicine has generated a pointed response from skeptics (see here, here, here, and here), who ask – quite reasonably and appropriately – whether the science has been oversold.

The only way to escape the expectation/disillusionment cycle is for genomics and precision medicine to demonstrate palpable utility, tangible impact. We’ll be there when sequencing is embraced not because it’s interesting or edgy, but because it’s so obviously useful that once you’ve seen the benefits you can’t imagine not availing yourself of it.

The obvious analogy is Uber, though the point is not to become the “Uber of X” (as helpful as that would be to your buzzword bingo card). Uber is immediately appealing. You don’t routinely reach for Uber to express your solidarity with the gig economy, or to project hipster cred. Rather, to use Uber once is to understand it’s utility, and recognize what an elegant solution it is for a problem you might not have even known you had. The challenge for precision medicine is to be as intuitively and immediately useful as Uber.

While genomics may not quite be at this point yet, I think we’re seeing many early signs of progress. Examples include: 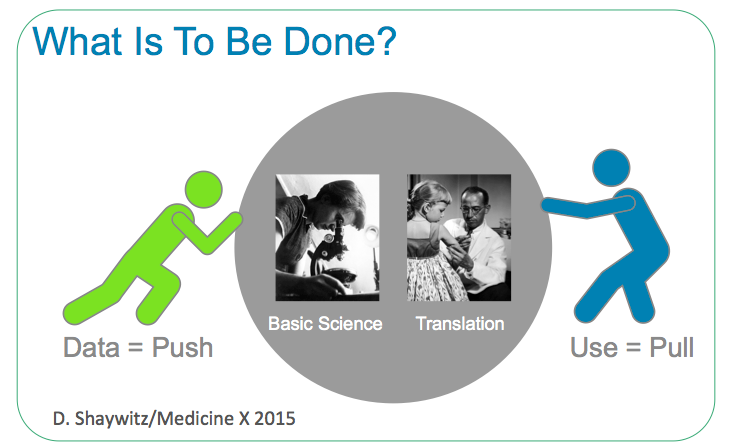 To accelerate progress, we can consider four broad categories:

As we contemplate the future of genomics, and of precision medicine, it’s easy to get caught up in the technologies, in all the amazing gadgets and devices that we hear about every day. Yet, we must remember that while the promise of precision medicine may reflect advances in technology, realization of this potential will require impassioned champions.

The need for champions has been made by Flowers and Melmon, in the context of pharmaceutical drug discovery, and by the late Judah Folkman, who said medical progress is driven by “inquisitive physicians” and “inquisitive researchers.” In a sense, this is all just a restatement of Margaret Mead, “Never doubt that a small group of committed citizens can change the world; indeed, it’s the only thing that ever has.”

And, hopefully, precision medicine will be fortunate to attract and inspire future champions, people like you.

Dr. Shaywitz is Chief Medical Officer of DNAnexus. He also holds an adjunct appointment as Visiting Scientist in the Department of Biomedical Informatics at Harvard Medical School, and is co-host, with Lisa Suennen, of “Tech Tonics,” a podcast “focused on the people and passion at the intersection of technology and health,” available on iTunes (here).